Among them Kyaikhtiyo is one of the famous pagoda and most scared pilgrimage sites in Myanmar. 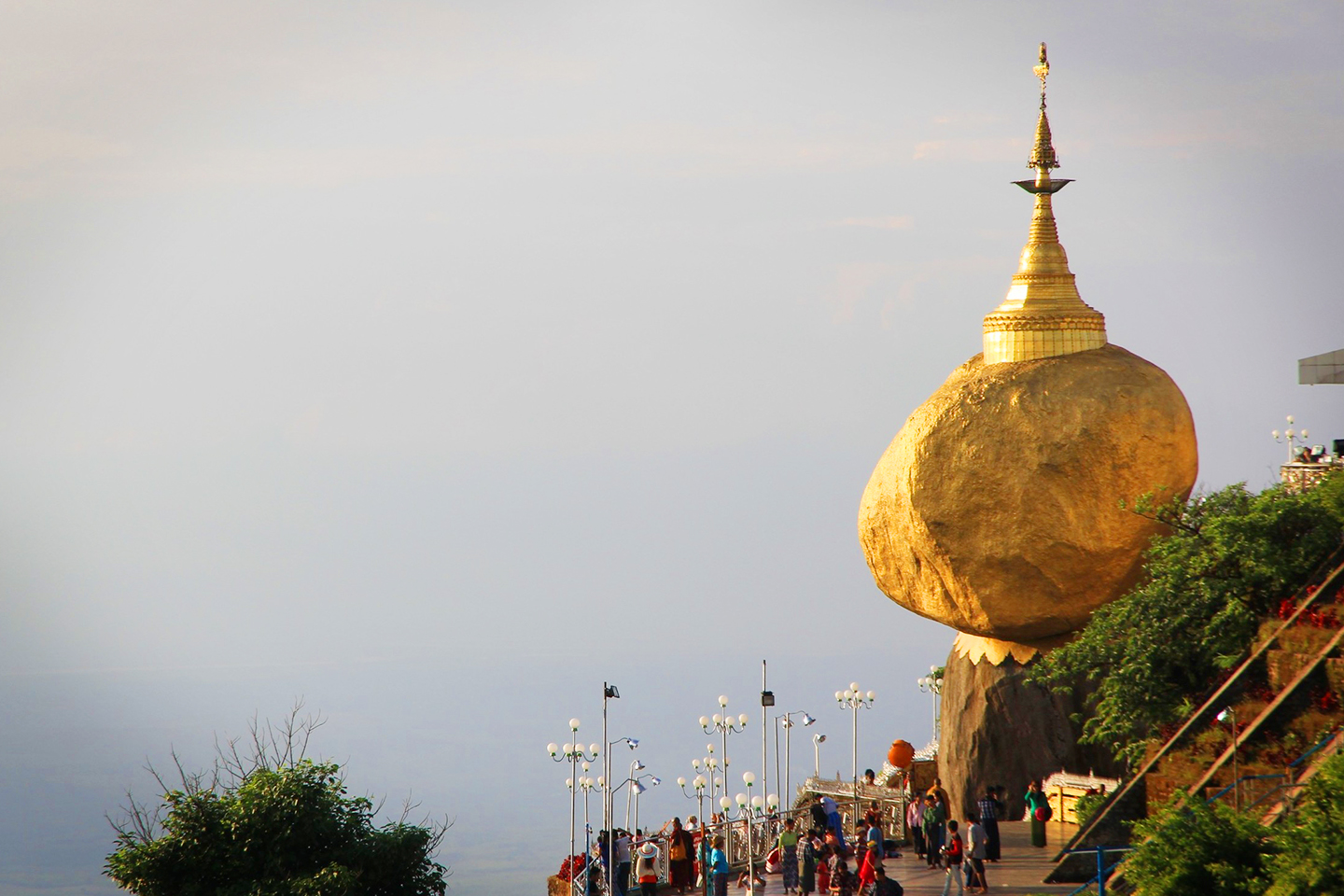 (Source: wikimedia)
There are lots of famous pagodas in Myanmar (also known as Burma). Among them Kyaikhtiyo is one of the famous pagoda and most scared pilgrimage sites in Myanmar. The pagoda is also known as “The Golden Rock” which is located at the summit of the Mt. Kyaikhtiyo and it is at an altitude of 1100 m (3608.92 feet) above the sea level. It is situated in the small town of the Mon State called Kyaik Hto which is 210 km (130.49 mile) away from Yangon. As of the Mon tradition, “Kyaik” means “Pagoda” in Mon language, “Ithi” means “Hermit” in Pali language and “Yo” means “To carry on the hermit's head”. That’s why “Kyaikhtiyo” means “the pagoda carried on the hermit's head”.
When you go on the summit of the Mr. Kyaikhtiyo, you can see a massive round boulder at the extreme edge of the cliff with a pagoda on top of it. It is actually a huge granite boulder that is covered with gold leaves applied by the Buddhist devotees and becoming the golden rock. There still have many other pagodas and also have waterfall which is not very far from the main pagoda. So if you are interested to go around and have extra time for this, you can enjoy those attractions. The entrance fees for the foreigner are 10,000 Kyats per person (the counter will be at the half way from the station to the main entrance).

The Structure of the pagoda 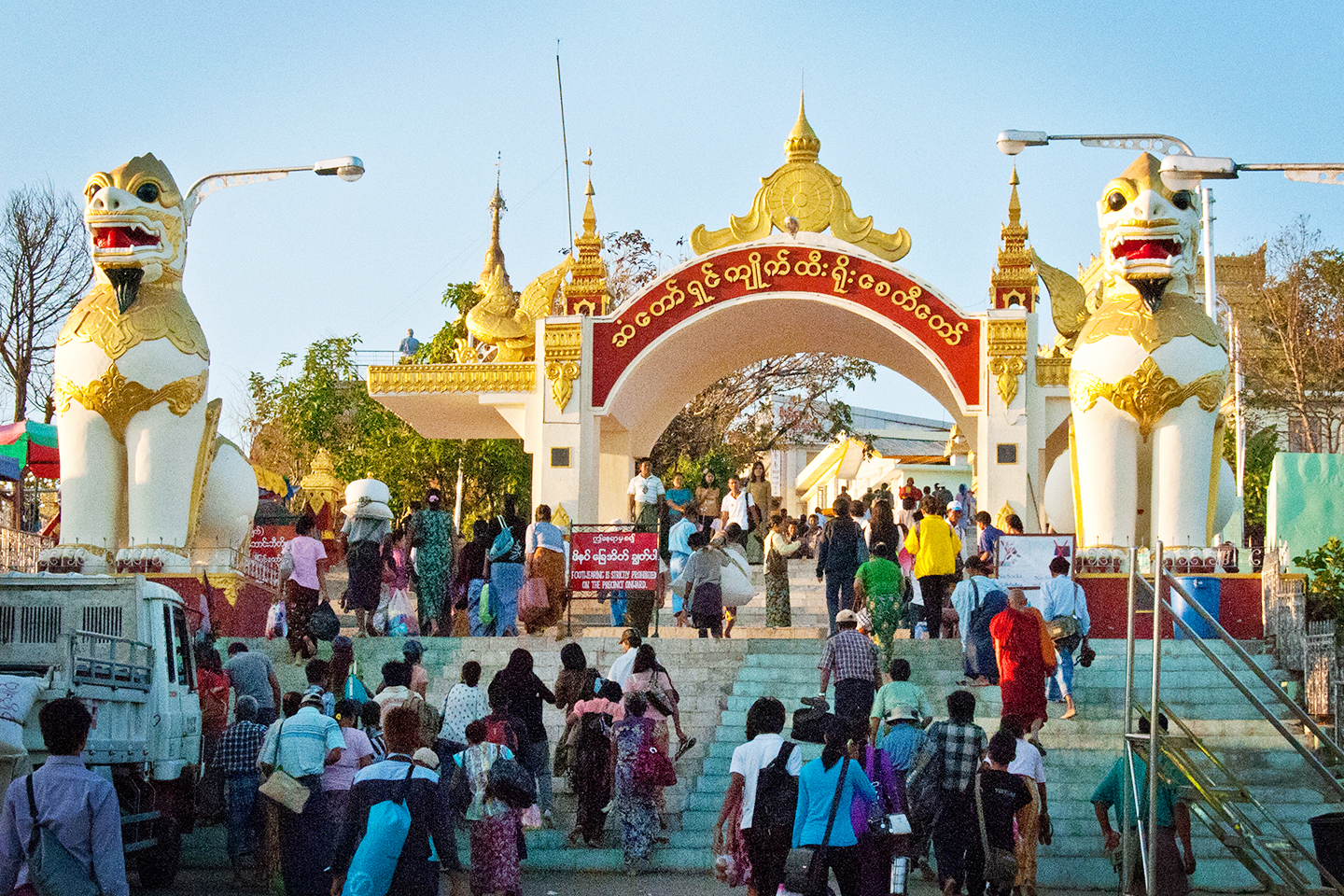 (Source: wikimedia)
The boulder is about 7.6 m (24.93 feet) in height and 15 m (49.21 feet) in girth. The pagoda above the boulder is about 7.3 m (23.95 feet) in height. The golden rock is laying balance on the extreme edge of the cliff of the separated natural rock platform from the mountain and there is a small iron bridge that link between the rock platform and the mountain. The contact area of the boulder and the rock platform is very small and it seem like it will fall at any moment. The boulder is enshrining with hair relics of the Buddha and it stands against the gravitational pull of the Earth by rolling off from the edge of the hill. 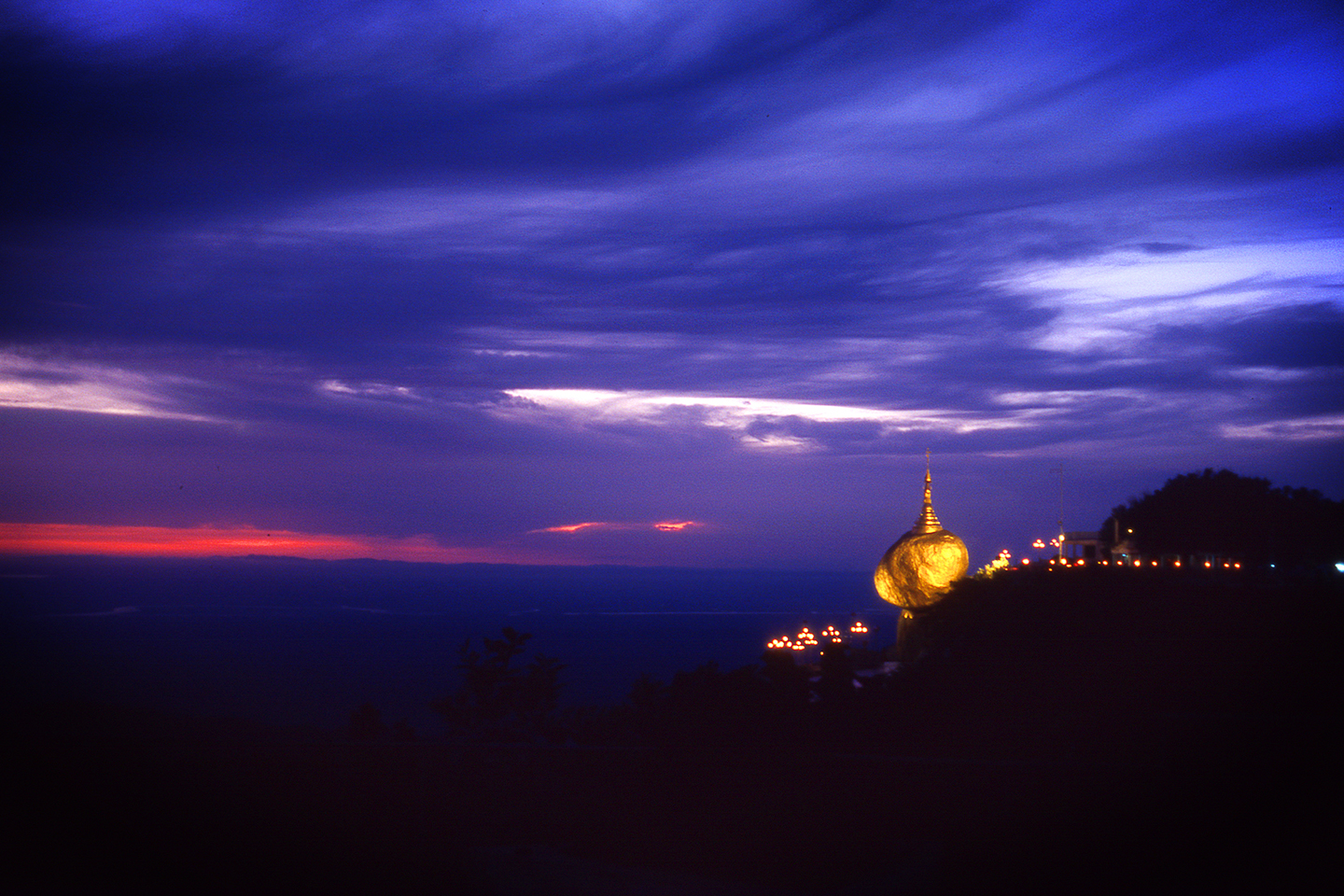 (Source: wikimedia)
According to the legend, about 2500 years ago the great Buddha met with the hermit called Taik Tha. The hermit offered the rice box and the Buddha gave two strands of hairs in return. The hermit safely placed the strands of hair he received from Buddha inside the tuft of his own hair. The hermit wished to build a pagoda before he die and he went to see the King to request him to enshrine the hair relic in a boulder which is the same shape of the hermit’s head. The King possessed the supernatural powers which he inherited from his talented alchemist (known as “Zawgyi” in Myanmar language) and his dragon princess mother (known as “Naga” in Myanmar language). The boulder which is exactly the same shape of the hermit’s head was found at the bottom of the sea and found the perfect spot to place the boulder with the help of the Thagyamin (who is the King of the Nats (Spirits) of Tawadeintha Heaven in traditional Buddhist belief).

Festivals of the pagoda 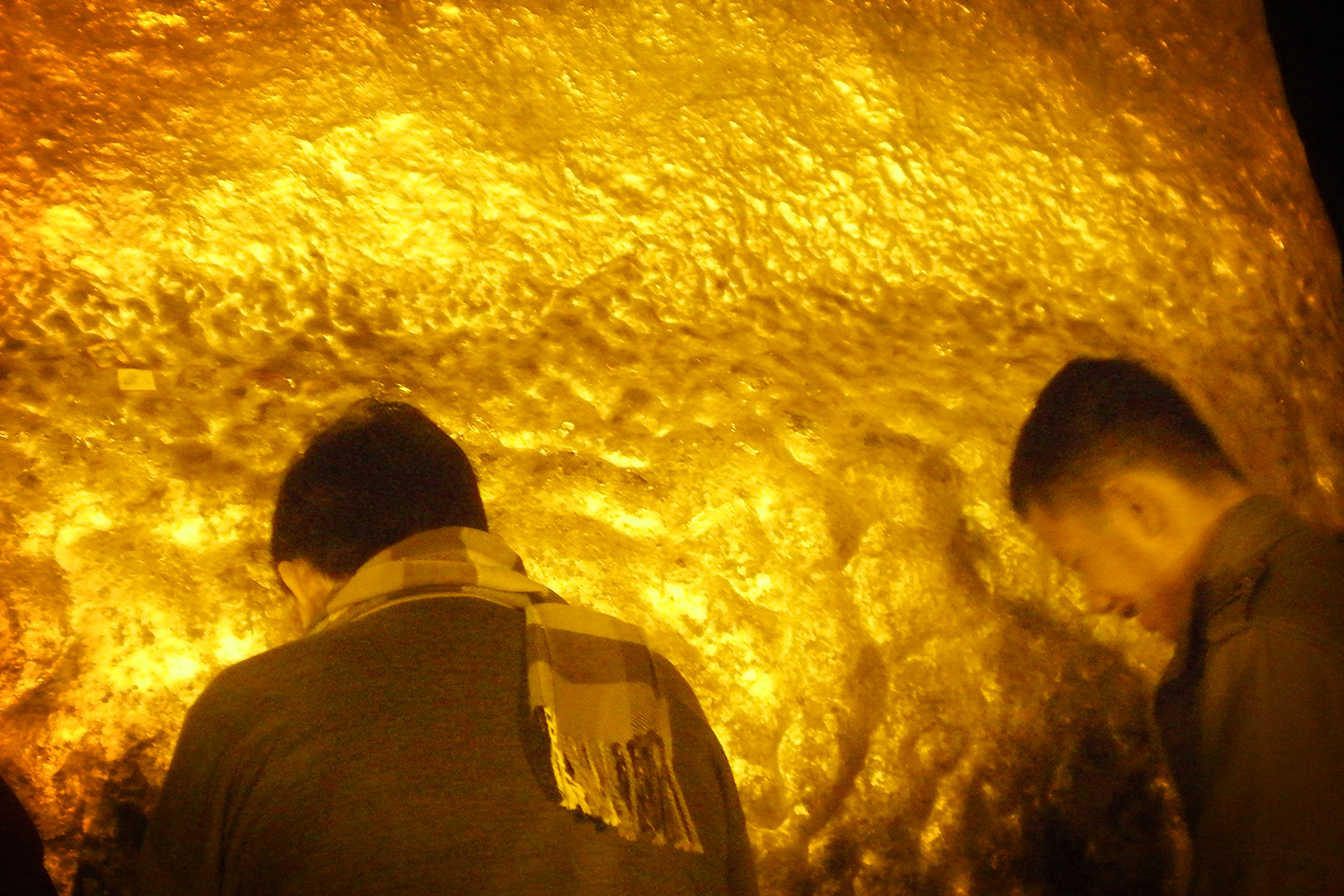 (Source: wikimedia)
Every year from October to March is the regular pilgrimage season for the pilgrims and the visitors. The pagoda is always light up with candles, incense sticks but it is overcrowded during the festival season. Many pilgrims also chanting and do the meditations throughout the night and applying the gold leaves to the pagoda. The mountain top area around the pagoda is lighted up with nine thousands candles on the full moon day of Tazaungmone to pay homage to the Lord Buddha and the pilgrims are offering the foods, fruits, water and so on at the very early morning of the next day. All women are prohibited to go near the pagoda at any time but men can go pay respect nearby and apply the gold leaves to the pagoda. There will be the pagoda trustees who guard the gate.

How to get there? 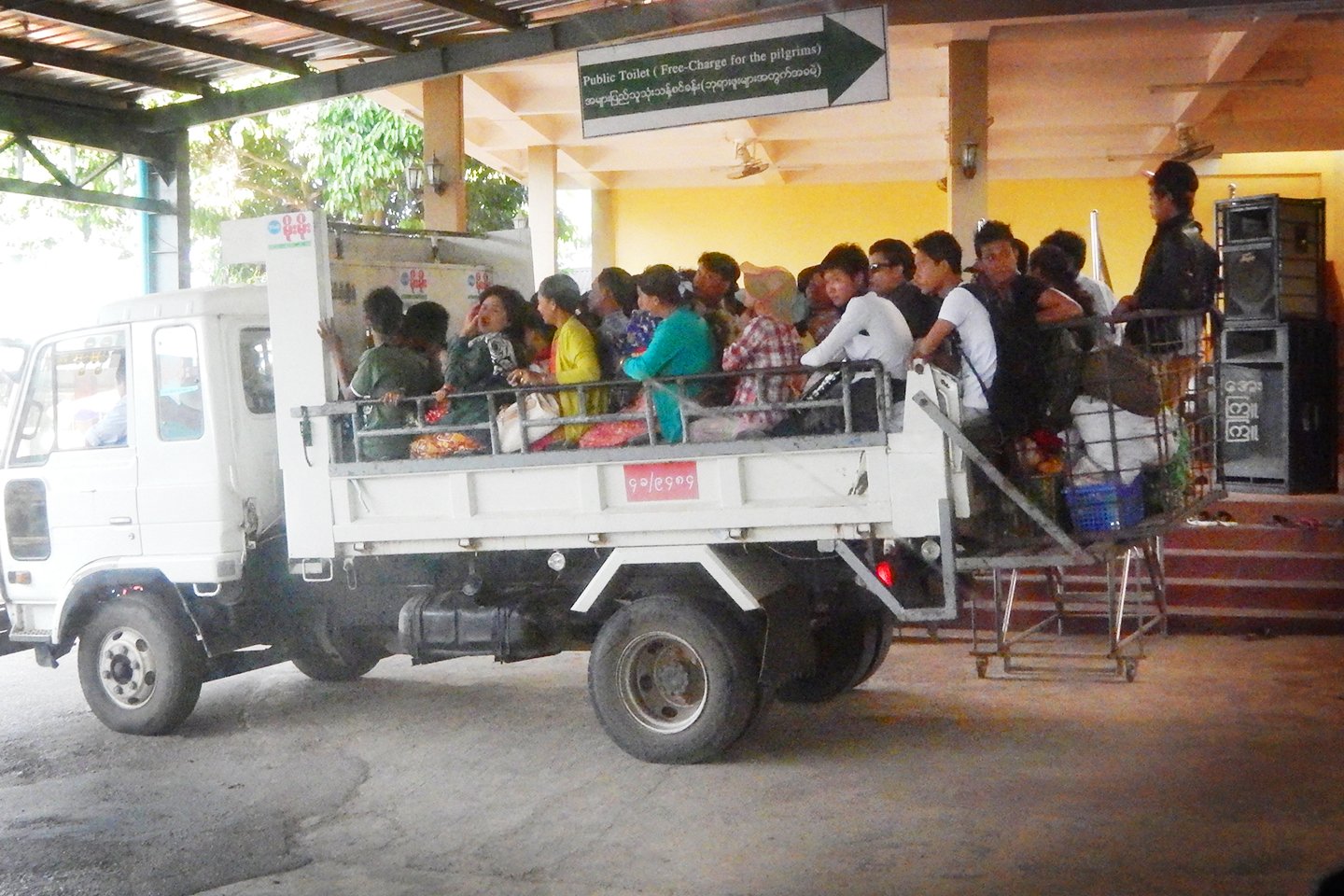 (Source: wikimedia)
You can get there by buses or by trains from Yangon. The bus usually takes approximately around 5 hours and the regular bus departs from early morning till afternoon from Yangon to Kinpun which is the base camp of the Kyaikhtiyo Pagoda. The bus rates are from 8000 Kyats for foreigners and 4000 for locals for one way. There is also VIP bus and you can choose upon your budget. Make sure to buy the direct bus because there will be other bus which go beyond to the other destination only arrive to Kyaik Hto and you need to take local bus again to Kinpun. The bus departs from early morning till afternoon from Kinpun to Yangon too.
If you want to get there by train, there will be only 3 trains depart from Yangon at 07:15, 18:25 and 20:00 respectively and it takes about 4.5 to 5.5 hours to Kyaik Hto. The train offers only 2 kinds of seats: ordinary seat (costs around 1200 Kyats for one way) and upper class seat (costs around 2500 Kyats for one way). As the train only arrives to Kyaik Hto, you have to take local bus to Kinpun. There are many buses go and forth between Kyaik Hto and Kinpun and costs around 500 Kyats. The train departs from Kyaik Hto at 12:33, 23:55 and 01:30 respectively and it takes around 5 hours to Yangon.
After arrive to the Kinpun, there will be the truck station to the Kyaikhtiyo Hill. The truck costs 3000 Kyats for the comfortable front seat and 2500 Kyats for the back seat per way and you will arrive to the Kyaikhtiyo Truck Station within 25 minutes. The front seat is limited (only have 5 seats) and you have to book at the counter. For the back seat, you can sit anywhere and the truck departs as soon as it is full. The truck ride will be a little adventure but the breathtaking view is waiting up there. There is another option to go: you can take the cable car to the top but you have to take the truck first from Kinpun Truck Station to the Yathae Taung Truck Station. The cost of the truck to Yathae Taung Truck Station will be a little cheaper than the direct ride to the Kyaikhtiyo Truck Station.
The cable car costs 3000 Kyats per way for the local people and 5 USD per way for the foreigners but it is free for monks and nuns. The operating hours for the truck and the cable car are from 5:00 to 18:00 every day. It will take around 10 to 15 minutes to the main entrance of the pagoda from the Truck Station or the cable car station. Nowadays, the transportation systems are much easier and convenient.

There are not many choices for the accommodations on top of the Mt. Kyaikhtiyo and will be expensive but you can have a stunning view to enjoy. The expensive upscale mountain top hotels like “Kyaik Hto Hotel” and “Mountain Top Hotel” are available and you can also find some budget hotel like “YoeYoe Lay Hotel”. Most people stay at the Kinpun area because there are a lot more variety to choose the accommodation and restaurants. “Golden Rock Hotel”, “Pann Myo Thu” and “the Sea Sar Guest House” are some of the good and affordable hotels in Kinpun. There are also lots of restaurants and shops around that area.

One day tour from Yangon

Do you like this article?
If you have MingalaGO user's account, you can add bookmark into your mypage.
add_circle_outlineLogin to add Bookmark 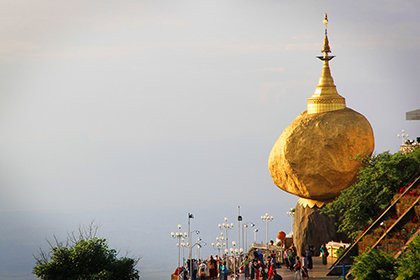